An Update on The Thin Man 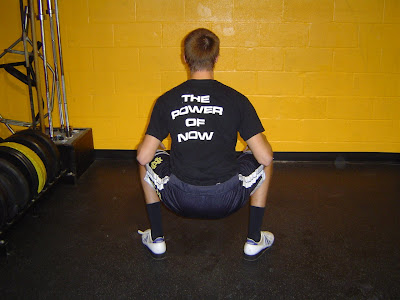 First things first: The Thin Man is finally getting thick! That's right. Chris is now 20 lbs heavier than he was in July, during the height of the boys' club volleyball season. And it definitely shows. He demonstrates increased strength in a variety of movements and he is putting some heat on the ball during volleyball practice with better quality movement and mechanics. And no, we didn't do it by squatting heavy (he never squatted over 155 for 5s) or heavy barbell cleans (blasphemy!), yet he put 20 lbs on his 1 RM squat. We did, however, do a bunch of single leg work and some moderately heavy lifts/jump shrugs with the Hexlite bar.

So, why has Chris finally been able to put on some weight? Well, there are several reasons. First, we are sure the pubertal turbo boosters are firing up. His appetite has increased and he is sweating more in training. Second, he is doing better at consistently eating more during the day and getting post-workout calories. Third and most importantly (in my opinion), he has had time away from volleyball.

From January through July, Chris had basically non-stop volleyball. High-stakes club qualifiers in Jan/Feb and then the high school season March-May (state championship), followed by an insane June club competition schedule leading up to July club national tournament and finally a USA Volleyball Youth Continental Team Camp in Florida. By the end of July, he was physically and emotionally toasted. And he weighed 170-ish lbs.

His 17s club coach and I both strongly advised him to take Aug-October off from structured and unstructured volleyball. No weekend grass tournaments, no open or positional practice gym time. Just sleep, eat, go on family vacation, get the senior year of high school started on the right foot and train with me 2-3x a week. No extra calories were to be burned with sloppy pick-up volleyball. The mind and the body desperately needed a break from any practice or sport training. And Chris listened to us in spite of peer pressure from many around him.

So in 10 weeks, he has refreshed his mind, his legs and that big swinging arm. What is the lesson here? Less is more. Better is more. Chris didn't need to play more volleyball to improve. He needed time away from volleyball to build his body and refresh his love for the game. He needed time to rehearse proper swing mechanics slowly, without the ball (see this post). At 196 lbs, he sees what he is capable of when his frame has the foundation it needs. My goal is to have him at 205 lbs by Thanksgiving and maybe 215 lbs by the time high school season starts in March, but the Jan-Feb club season might hurt us with lots of weekend tournaments and travel to Chicago and California.

And so this formerly awkward, pain-fully thin, 6' 9" middle hitter is slowly but surely transforming himself into a knowledgeable, powerful right-side hitter, capable of getting low and playing defense, even when no one but his 17s coach and I believed he could do it. We knew it would take time, but his dedication to is paying off. Chris has been invited to make official visits to UC-Irvine (reigning NCAA volleyball champions), USC, Hawaii and Pepperdine. Pretty cool for a Missouri boy to be courted by the West Coast power houses. He doesn't yet know where he'll end up, but he is excited to see what he can do over the next 6 months. And he now fully appreciates the importance of rest, recovery and the value being process-oriented.

The opposite scenario you mention is a terrific example of the insane running the asylum. Unfortunate and glad you were able to create a specific correction.
1:06 PM