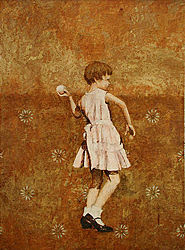 I'm working with a 16 y.o. swimmer/water polo athlete. He's a dream to work with strength-wise as he has no mobility issues. We are starting from scratch, but he will do well.

The biggest challenge we'll face is working on his throwing. This is a kid who swam and played soccer and basketball as a youth, but who never learned how to throw properly. How to describe it? Well, some have used that phrase we all know so well: throw like a girl. But from a mechanics standpoint, what does that actually mean?

For this kid, it means not having any flow of using the hip / shoulder rotational sequencing (primarily using lumbar extension), dropping the elbow significantly just prior to release, and--most importantly, no wrist flexion follow through with the arm following through. When I watched him at first, it was amazing to note that he released the ball with his wrist almost fully extended.

After two sessions, I've gotten him to get better wrist positioning and follow-through using two hands with med ball slams and supine throws. He's just starting to get some zing on the ball with two hand overhead work. Still lacks one-handed coordination, but reports his coaches and teammates are already noticing a difference as he was hitting the corners of the goal last week.

It is hard for me to imagine growing up in this country and not learning how throw a ball. But, this guy was clearly using his motor system for other skills during the prime developmental stages. I, on the other hand, am told that my aunt (in her 20's studying to be a PE teacher and playing college softball) took me at the age of 18 months and began playing catch with me. That grew to hours and hours of "toss to myself hit the ball over the fence in grandma's back yard" and eventually a full football uniform for Christmas at the age of 6 with many more hours of punting onto the roof and begging anyone I could to play catch with me. By second grade, I could throw and catch any ball that came my way. By 5th grade, I was in the gym emulating my favorite basketball players shooting jump shot after jump shot.

I was determined to never, ever let anyone tell me I shot (or threw), well, like you know what. And my motor system was being exposed to all kinds of ground-hand-eye-ball movements during prime-time nervous system development.

Surely I digress, but my point is this kid never fully developed ground-based basic throwing skills as a youngster because he participated in sport activities that didn't use those skills specifically. If you never learn it, you don't have it. His coaches are a bit skeptical, but I think there's still hope. Although he's older, and his motor system is a bit less pliable, we'll make some giant strides with some simple practice and understanding of basic throwing mechanics. This has really challenged my eye and my ability to decipher and communicate what to me, is a very easy, almost innate, motor task. It is a great exercise in whole/part/whole drill instruction. I am forced to come up with novel ways of getting this guy's body to move effectively with the ball in his hands.

(The picture is of an oil painting on canvas, titled "You Throw Like a Girl" by Pamela Murphy.)

Anonymous said…
Just thought I'd leave a link to my favorite "throw like a girl" story from the last year or two here in upstate NY:

And a nice blog entry about the cluelessness of her coach here at http://www.dbs.id.au/blog/misc/perfect-game-imperfect-coach.html.
3:20 AM