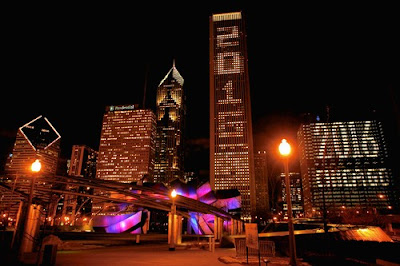 Hi dee hi dee hi dee ho! My second home (college & grad work) and THE SOUTH SIDE now earns the right to bid against Rio, Madrid, Tokyo and Prague for the 2016 Olympic Games. The Monsters of the Midway will put up a great bid and hopefully the world will again gather in Jackson Park, The Midway Plaisance and Washington Park--as they did for the 1892 World's Fair.

Take the Metra from the 53rd Street stop to weightlifting and indoor volleyball at McCormick Place East? Woo hoo! Take the #6 Jeffrey Express to track cycling right on Lake Shore Drive??? Swimming at UIC??? Come on University of Chicago, put your brains, connections and money to work and help the USOC win the bid. Make the South Side shine!

An Olympic Stadium in Hyde Park? Man the thought of that just blows my mind....Nothing like taking in some Olympic sports and then hitting Jimmy's Woodlawn Tap for a beer and the Medici on 57th for a late night basket of fries. I might just have to break down and have my old favorite omelet at the Salonika at 58th and Blackstone.

What would Amos Alonzo Stagg think? Is Robert Maynard Hutchins turning in his grave?? Hey, as long as we've got DITKA on our side, how can we lose?

Wave the flag of old Chicago,
Maroon the color grand.
Ever shall her team be victors
Known throughout the land.
With the grand old man to lead them,
Without a peer they'll stand.
Wave again the dear old banner,
For they're heroes ev'ry man.