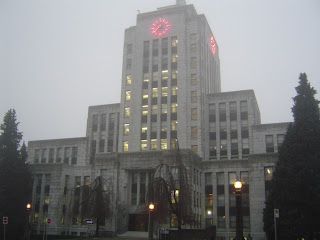 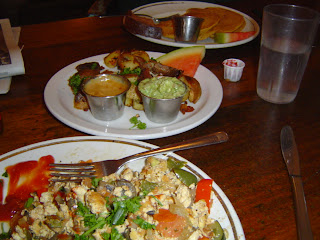 Unlike the majority of folks in the airport early Saturday morning, we weren't headed to Cabo or Cozumel, with flip flops and beach wear on. We were making our way to Vancouver, clad in fleece. We were ready to explore a neat West Coast urban city. On foot, no rental car. Bed and breakfast lodging, just west of the Kitsilano neighborhood.

The building above is Vancouver City Hall, which we can see outside our room window.

Vancouver is a vegetarian and vegan paradise. Last night we dined at the Buddist Bo Kong Restaurant. This morning, we walked the 6 km to The Naam, a funky veggie place that's open 24-7 and been serving food for 30 years, for our vegan-yummy breakfast: tofu scramble (mushroom, tomato, onions, cilantro), home fries w/ miso gravy (GREAT!) and a side of fresh guacamole, vegan pancakes (w/ banana and real Canadian maple syrup. This place rocks! We will be back for several more meals. There is a giant apple & blueberry pie in the dessert case calling Kevin's name and a vegan chocolate-raspberry cake calling my name--not to mention a nice selection of organic beers and wines. Cashew and avocado enchilada? Nice.

There are some great bike shops here and lots people riding, even when it is raining. Roads are marked as bike routes. Our cab was a Toyota Prius. We've seen a PINK Smart Car. All of the joggers with their dogs are also carrying the required poop bags, as picking up after Fido is the law. Green is the word here.

And despite the occasional fog and rain, we are having a great time on our "spring break." We won't come back to St. Louis tan, but we will come back refreshed and invigorated after taking in the best of Vancouver, BC. And eating some of the best vegan food in North America.